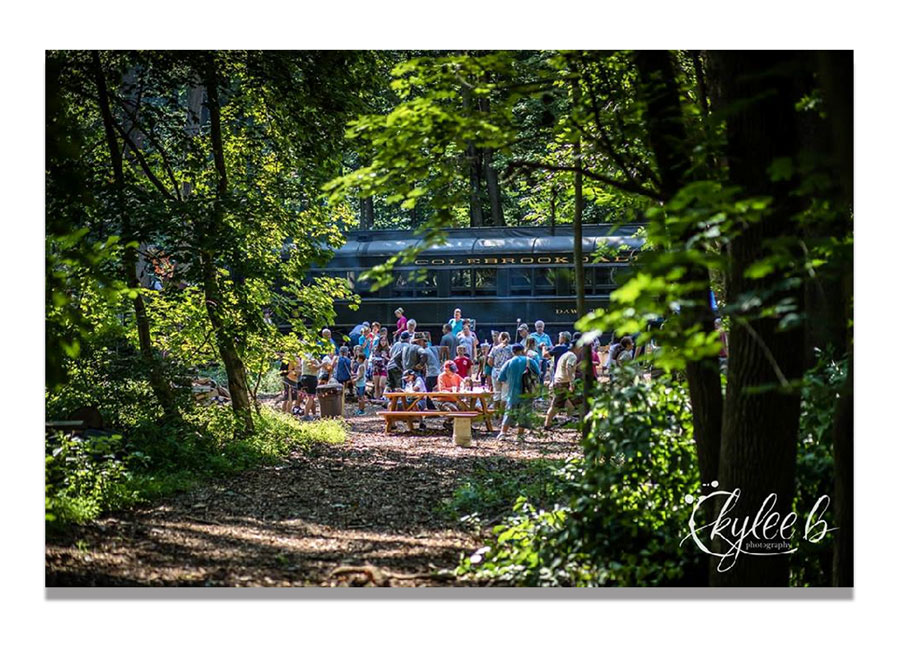 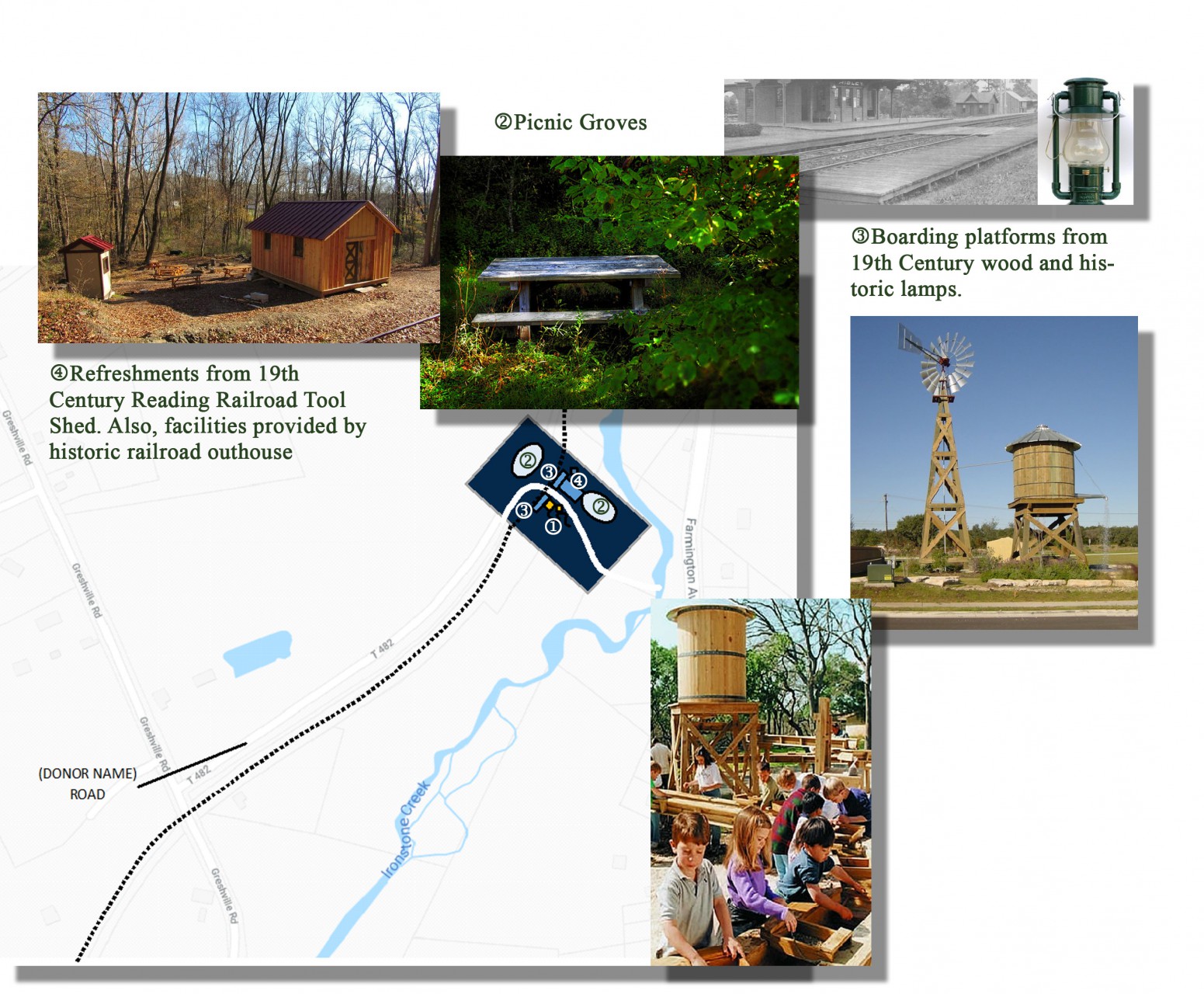 The Colebrookdale’s water tower may ultimately serve to quench the thirst of a historic steam locomotive, but for now, it will provide water for a children’s mining sluice, shown on the next page. The mining sluce will teach children Pennsylvania history. Children will be give a bag of rough preloaded with items that teach about our area’s mining heritage, geology and Native American heritage.

The railroad windmill, used at rural railroad outposts to pump water from wells, was a familiar part of the vernacular Pennsylvania landscape. They, and the wooden water towers that stood by their side, were quintessential elements of a rural landscape home to thirsty steam locomotives. 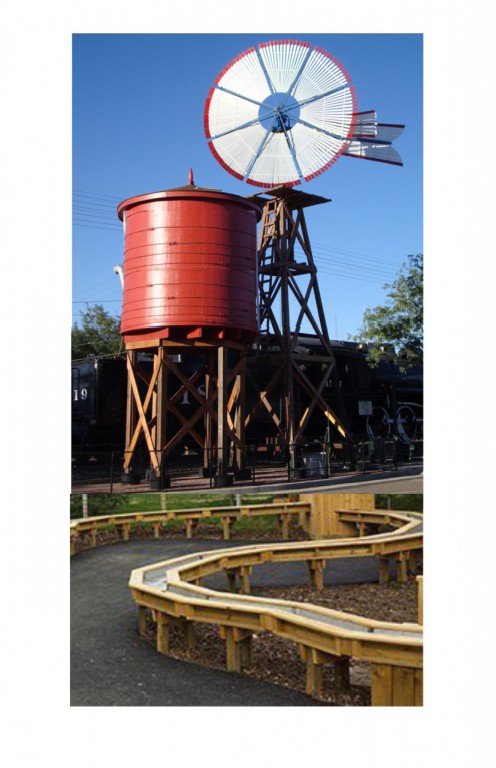 1.    Pennsylvania Department of Community and Economic Development’s    Educational Improvement Tax Credit Program’s investment to allow school children to experience the Colebrookdale Railroad as part of their learning Pennsylvania history, Native American heritage, geology, industrial heritage, environmental stewardship, sustainable energy, and historic preservation. An important asset in the Colebrookdale’s educational mission, the high-visibility site will be annually used by thousands of  regional school children. The site will serve as a base for school tours, with an indoor area for presentations, a recreated mining sluice nodding to our mining heritage that will be an interactive teaching tool, picnic and boarding facilities.

2.    Rail Bikes Tours. We will be the first railroad in the region to offer rail bike tours and the Colebrookdale site will be a base for them. Rail bikes offer an opportunity for visitors to experience the natural beauty and historic fabric of the rail line in a dynamic way that also provides exercise.

3.    Secret Valley Trail Hub. As part of its development of the Secret Valley Natural, Recreation, and Heritage Corridor, the Colebrookdale Railroad is working with our partners to plan a trail between Pottstown and Boyertown. Last year, our volunteers re-opened the old main street of the now-abandoned village of Colebrookdale (site of the proposed project). This path serves as a connection to the Ironstone Creek and the village site to the likely routes of the future Secret Valley Trail. As such, the proposed improvements can serve the future trail.

In 2017, the Railroad moved a 19th Century Philadelphia and Reading Railroad tool shed from Lenhartsville, Berks County, to Colebrookdale and restored it for use as refreshment and souvenir stand for the grove. It will also serve as a classroom space for EITC visitors. We placed it along the old road that was the village main street, which we re-opened in 2016.

Also, in 2017 we also restored a historic outhouse once located at the Colebrookdale Railroad’s station in Barto. The outhouse, now located in Colebrookdale, serves its original purpose, albeit with the help of a solar-powered composting toilet.

We are seeking funding to complete the mid-route amenities at the site, which include:

1. A boarding platform, constructed using 19th-Century decking from the docks of Philadelphia.

4. The drilling of a well for water

5. A windmill, commonly used at rural railroad outposts to pump water from wells

7. A mining sluice to teach children Pennsylvania history. Children would be given a bag of rough preloaded with items that teach about our arras's mining heritage, geology, and Native American heritage.

The educational value of the Colebrookdale site is important. A journey through time and space, the Colebrookdale Railroad experience is a visceral, auditory, visual, and real-time one that informs passengers about the dangers of over-consumption of natural resources, Pennsylvania’s rich heritage of industrial pioneering, and the amelioration of nature and man in the post-industrial age. It is therefore a powerful teaching device. The Colebrookdale Railroad Preservation Trust was approved for the Pennsylvania Department of Community and Economic Development’s Educational Improvement Tax Credit (EITC) Program. The EITC program allows for-profit entities to donate to the Colebrookdale to sponsor free excursions to local school groups. The educational program we have developed is called “Rails of Revolution: Industrial, American, and Environmental Revolution in the Hearth of Early America.”

·     Native American history lands where the railroad passes were populated by the Lenni Lenape;

·     Geology: unique geology of the region includes iron-laden ores that made Thomas Edison a regular visitor;

·     Iron industry: the industries along the Colebrookdale established Pennsylvania as the crucible of the American Industrial Revolution and gave power to the American Revolution; 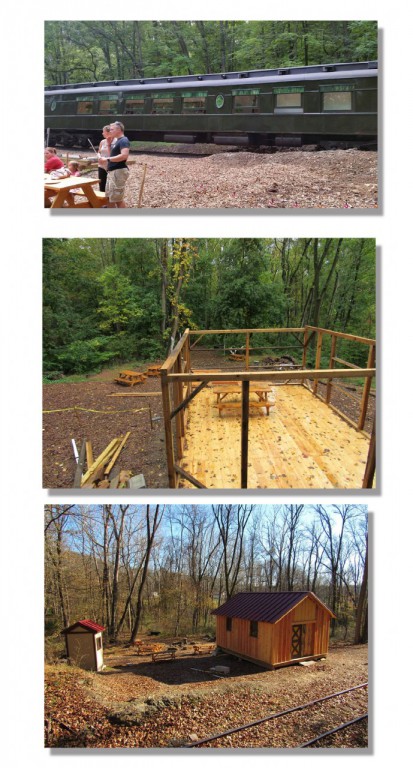 The improved Colebrookdale site will serve as a destination and respite site for the region’s first rail-bike operation, which we hope to inaugurate no later than summer 2019.

This photo shows Colebrookdale’s train awaiting passengers who are enjoying a summer picnic and barbecue.

Here we see the Colebrookdale site under construction, showing the 19th-Century Philadelphia and Reading Railroad Tool Shed and Outhouse, restored and re-located to the popular former ironmaking village site.

Naming rights for this exciting new initiative are available. Please contact us for further information.