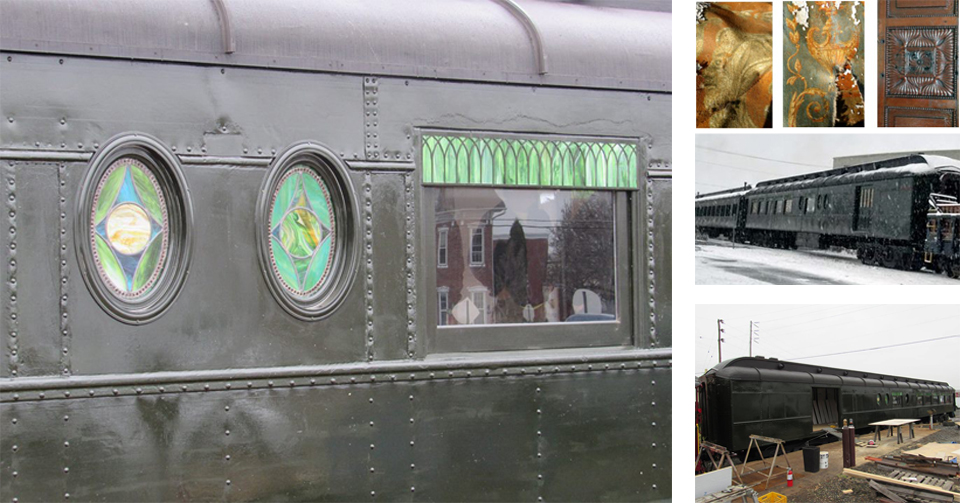 Salvaged from the scrap line, the car will be a celebrity highlight of what elected officials have called “the most important project undertaken in our region in decades.” True to the Trust's mission to embrace rather than merely

accommodate persons of all mobility, the car will be the first of its kind to be ADA-compatible. Restored in a configuration similar to the buffet-barbershop-library/lounge cars that were the lead cars (just behind the locomotive) on each of the great limiteds of the early part of the last century, the large doors on either side of the car will permit standard-sized wheelchairs to enter the train. The car’s appointments will include ADA-compliant access doors, an ADA-restroom, a café kitchen, a private dining section under a dome, a master dining section for 18, and a lounge seating 15. No cars of this sort exist in preservation today.

The interior of the car will come from a Wagner Palace Car Company parlor car. To our knowledge, this interior is the last of its kind and is truly breathtaking. The Trust's volunteers discovered the remains of the Wagner Car on a farm in rural Ohio. Sadly, it had collapsed, but its wreckage shielded from the elements much of the fantastic molding and decoration characteristic of Wagner Palace cars. Because of the paintings discovered under several layers of subsequent paint on the ceiling and clerestory cove, we believe the car served on the Lake Shore Limited as one of a series of parlors described as having a "Shakespearean Revival motif" interior created by Wagner. We have salvaged all the items that could be salvaged and have brought them to Pennsylvania for restoration and, pending funding, installation in the ADA-compatible car.

The car body was built in the mid-1920s and was restored in 2017, including a new floor, new windows and sills, new vestibules, and stained-glass transom and ancillary windows replicating Pullman designs. Built as a paired-window long-distance coach, the car retains its character-defining clerestory roof, six-wheel trucks, and other original features. It is of a composite construction, with a steel underframe and superstructure but wood floor and tongue-and-groove roof. Roller bearings and type E couplers mean the car is capable of transport on Class I railroads.

Our volunteers and donors have invested thousands of hours and hundreds of thousands of dollars in the restoration of our existing cars, gems from the heavyweight golden era of passenger travel. Fully re-tiled 1920’s era bathrooms, mahogany paneling, Corinthian columns, replicated Tiffany windows and plush seats highlight the restorations. Work of this caliber is rare and both materials- and labor-intensive. The end results have been the most beautiful railroad cars in service on any tourist railroad in the nation and the perfect chariots to carry our passengers into the unexpectedly beautiful arcadia of the Middle Schuylkill. Our coaches have been featured by Philadelphia ABC and NPR affiliates and the Huffington Post. The quality of their restoration, coupled with the commensurate level of service we provide, is why the volunteer-powered Colebrookdale is the highest-rated tourist railroad in our region.

We are seeking your funding to bring this historic car back to life and to welcome persons of all ranges of mobility aboard our magical journey into the past.